WordPress 5.6 was released earlier today, and it is the last major release of 2020.

This new release is packed with a lot of improvements and new features. It also includes a brand new default WordPress theme.

WordPress traditionally releases a new default theme each year which is usually named after the year. WordPress 5.6 comes with Twenty Twenty-One as the new default WordPress theme. This new theme provides a canvas for the WordPress block editor and the site editing features. It is designed to be simple, aesthetically pleasing, un-opinionated, and refreshing. 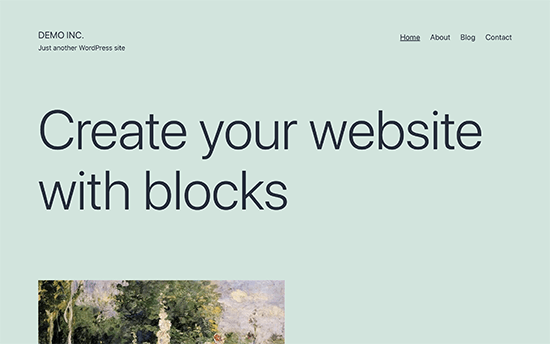 Twenty Twenty-One uses a pastel green background color, and two shades of dark grey for text. It also ships with colors for the dark mode which can be enabled by customizing the theme. 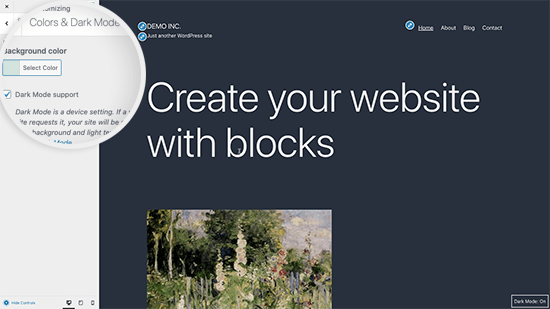 You can also change the background color by choosing from several pastel color schemes or choose your own colors. The theme will automatically adjust text color as well. 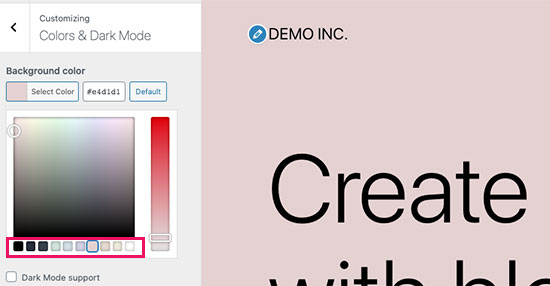 Here is a preview of what these built-in color combinations would look like.

For typography, designers opted to go with the default system fonts. This means no extra font files to load and easy to build child themes that have their own typography and fonts. If you are testing the theme with a fresh WordPress website, then you can try out the new homepage layout. Simply go to the Appearance » Customize page and click on the Publish button to generate basic website pages including a homepage. This sample homepage gives you an idea of what you can do with the block editor. You can simply edit the page and replace it with your own content. Earlier this year, WordPress 5.5 introduced patterns for the block editor. Twenty Twenty-One utilizes this feature by adding new block patterns that you can use in your posts and pages. 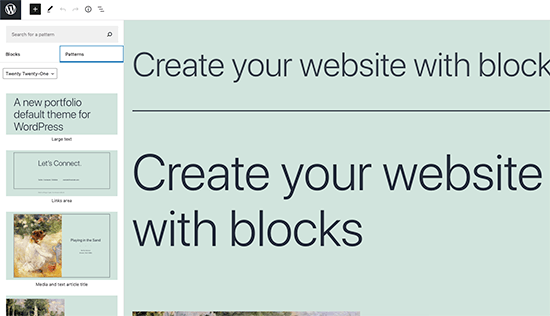 Overall this is a beautiful WordPress theme, that is easy to customize and can be used to make any type of website. 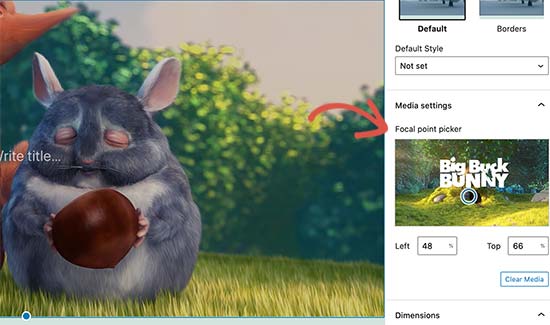 Patterns Organized in Categories The patterns panel under the ‘Add new block’ column now has a category switcher. This makes it super easy for users to find and use a pattern they need. Users will also be able to see the patterns available with their theme and distinguish them from the default patterns. 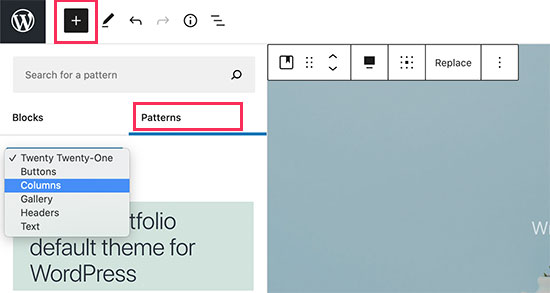 Keyword Variations to Improve Block Search The block editor now allows developers to store keyword variations that may help users find a block. This would improve the block search feature and will allow users to discover blocks added by block libraries or third-party plugins. 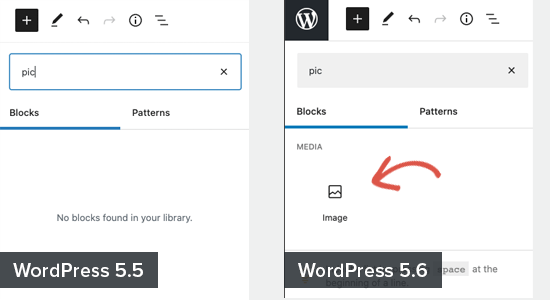 Characters in The Information Panel The information panel will now show characters along with words, paragraphs, and blocks used in your content. 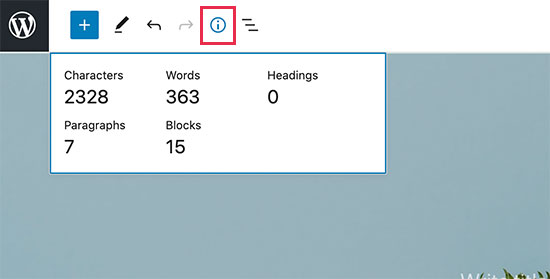 Color Support for The Lists Block The lists block now has the option to choose text and background colors without adding the list into another block. 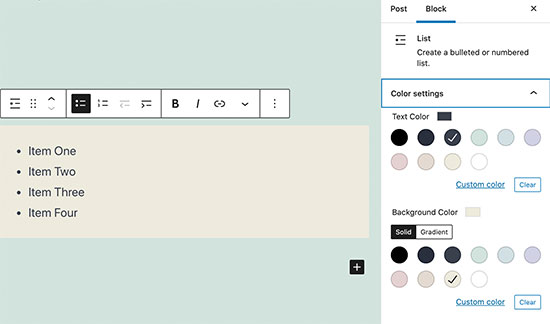 Social Icons Block Social Icons block has two improvements. First, there is a new gray style for social icon buttons. Secondly, users can now choose to open all links in the block in a new window.

Editor Options are Now Called Preferences The default block editor has a settings panel where you can set up the editor to your own liking. In WordPress 5.6, this modal is now called ‘Preferences’ instead of ‘Options’. 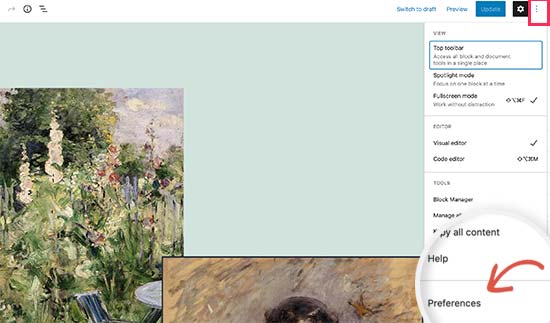 The modal itself now is more helpful with descriptions for different items. This would make it easier for beginners to decide which items they want to enable. 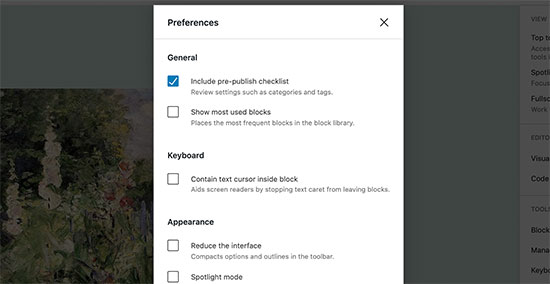 This is totally optional for you to decide whether you want to enable this feature or not. If you are using a managed WordPress hosting, then you don’t need to worry about that as they will automatically update WordPress for you. 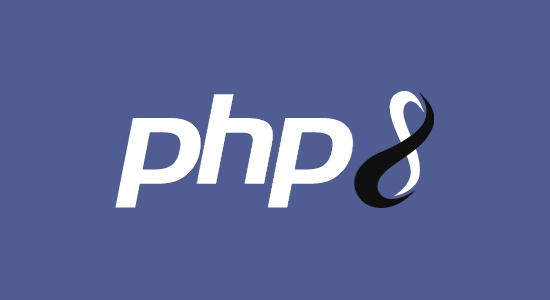 WordPress is written mainly with the PHP programming language. Just like WordPress, PHP also releases new versions to improve performance, add features, and fix bugs. They were expected to release PHP 8 on November 26 closer to the release of WordPress 5.6. The core team planned and worked hard to catch and fix any known compatibility issues with PHP 8. This will ensure that users who upgrade to the latest PHP version will not face any major issues. However, theme and plugin developers may still need to test their own code for compatibility.

The REST API in WordPress allows developers to communicate with a website outside the WordPress installation itself. To keep it safe, WordPress used cookies and nonce keys to ensure that only legitimate users can access the API. For developers, these methods were not very efficient to work with. WordPress 5.6 will allow developers to use application passwords in WordPress. Just like popular platforms Facebook and Google, the users can now give apps access to their website and manage it from the Users » Profile page. Users can also revoke an app’s access at any time. 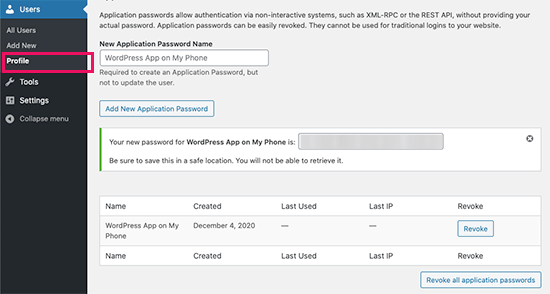 Under The Hood Changes

WordPress 5.6 has arrived with tons of features and improvements targeted towards developers. The following are some of the most significant under the hood changes. WordPress 5.6 continues the second phase of the three-step plan to upgrade the core jQuery bundled with WordPress. Theme and plugin developers relying on jQuery are already testing their code for any issues so it is not likely to affect large number of users. The new 5.6 release also includes REST API Batch Framework for making a series of REST API calls in one request to the server. A new action wp_after_insert_post is also available in WordPress 5.6. It allows theme and plugin developers to run custom code after a post and its terms and meta data have been updated. WordPress 5.6 has replaced older-style PHP type conversion functions with type casts. WordPress 5.6 also introduced the ability to merge WP_Error objects into one another. This would allow developers to add more than one item of data to the WP_Error object.

Who is The Best WordPress 5.6 Cloud Hosting?

ASPHostPortal.com as The Best and Affordable WordPress Cloud Hosting

From what we have discussed above, ASPHostPortal.com is a good option for hosting WordPress 5.6 websites by highly meeting the installation requirements of this application and offering packages with affordable price and rich features. The key point is that it ensures a reliable hosting environment with blazing-fast page loading speed and provides 24/7 responsive technical support.